There are not many management tools that are as economical as creep feeding. Commonly used by cow calf producers, creep feed is provided to nursing calves in a manner that does not allow for the adult cows to access it. The nutrients supplemented by the creep feed allow calves to grow at a rate closer to their genetic potential. Due to increased weaning weight, often times milk and pasture cannot support their full growth potential. Provision of creep feed helps to fill this nutritional gap and improve growth performance. Feeding creep feed helps to ensure uniformity of the calf crop from year to year. 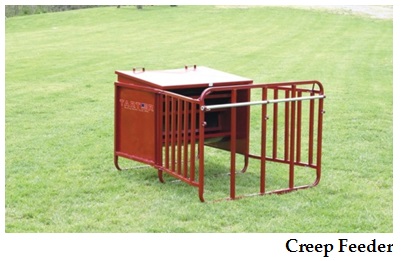 Calves supplemented with creep average an extra 100 lb of gain over the summer compared to those not provided with creep feed. To achieve this gain it takes an average of 400 lb of creep feed for a creep feed efficiency of 4:1. Keep in mind, that these numbers reflect average performance, which may not reflect the reality of farm to farm variability. Depending on the season, pasture quality, and milk production of the dam, more or less creep may be necessary. Despite this, creep feeding has consistently proven to be a profitable investment though the amount of gained income may vary.

Feed efficiency is at its peak in younger animals, making early introduction of creep feed a smart strategy. Though initial intake will be low, their efficiency of gain will still be valuable. Using a highly palatable creep feed will help to encourage this early intake. Using a creep feed medicated with an anticoccidial will also help to control coccidiosis early on. Bovatec and Deccox are two drug choices that do not affect intake and are also very effective against coccidiosis.

Keep in mind that a lush pasture does not mean that calves will be able to meet their nutritional needs from that and milk alone. Delaying creep feeding due to high quality pasture often results in disappointed producers. Though higher pasture quality will help to support growth, it cannot fill all the nutrient requirements for maximum growth. Creep-fed calves consistently outperform non-creep fed calves year to year.

How Much is Too Much

Creep feed is designed to be a supplement to milk and pasture, not as a standalone feed. Aim for creep intake of 1.5% of body weight or less. If calves are consuming more than this amount, it may be a sign that it is time to wean. Overconsumption can also occur due to late season weaning which is associated with spent pastures and decreased cow milk production. Products are available to limit calf creep intake; however, these will not be effective if there is not adequate pasture or milk available.