Hay quality is highly variable. Understanding how to evaluate quality is critical to making the best economic decisions when purchasing hay.  Overall, high quality hay should be high in crude protein, energy, and minerals, and should also have high intake potential. Hay should be free of dust, musty odors, weeds, etc.

Hay quality can be evaluated by looking at a few different aspects: 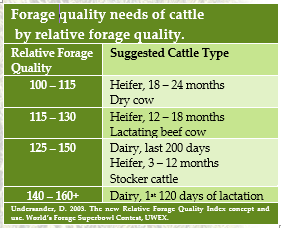 While these aspects all contributed to hay quality, hay is often priced based on its Relative Feed Value (RFV). RFV is calculated by combining predicted estimated intake (Neutral Detergent Fiber) and estimated digestibility (Acid Detergent Fiber) to create one index. RFV is used as a benchmark of quality when buying/selling hay.  However, lower RFV hay may feed out just as well. As mentioned previously, RFV is calculated solely off fiber values. RFV was initially developed for the dairy industry to rank the potential energy intake of hays for lactating dairy cows. This works particularly well for alfalfa hays. However, grass hay is a bit different. Grass hay has more fiber than alfalfa which reduces its RFV; however, that fiber is often more digestible. Grass hay is often ranked lower than it should be.

Relative Forage Quality, RFQ, was introduced as an improvement to RFV. Both are based on the same concept: (intake x energy content) / a standard (full bloom alfalfa). RFV bases energy off ADF, RFQ is instead calculated from equations specific to the type of forage (either legume or grass). RFQ can be used with all forages except for corn silage as it does not account for differences in starch availability. Overall, RFQ does appear to be the better estimator of value to the animal.