Bovatec and Deccox are both routinely fed to calves for control of coccidiosis. The modes of action of these two products may be different, but they have both been shown to provide excellent coccidiosis control. One of the greatest difference between these 2 products is currently the price. Using Bovatec in place of Deccox provides a savings to producers on both milk replacer and calf starter.

What is Coccidiosis? Coccidiosis is a disease caused by protozoans (typically Eimeria spp) damaging the mucosal lining of the intestine. Diarrhea is the most common symptom of coccidiosis, though it can be followed by poor feed efficiency, weight loss, and, in extreme cases, death.

Research data on Bovatec and Deccox show greater than a 97% reduction in shedding of coccidia oocysts, indicating that both products provide excellent control of coccidiosis. Figure 1 shows the reduction in fecal oocyst shedding when calves are fed Bovatec in both milk and starter as compared to control calves that did not receive any coccidiosis control.

Figure 1. Fecal oocyst shedding during a research study where calves were dosed 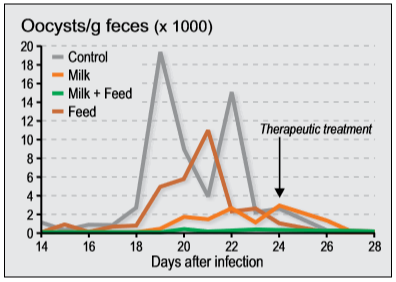 with Eimeria oocysts at 14 days of age and given one of four treatments: no Bovatec (Control), Bovatec in the starter feed only (Feed), Bovatec in the milk only (Milk), or Bovatec in both the milk and starter (Milk + Feed). Source: Zoetis, 2013.