Are Worms Eating Your Profits?

Internal parasites can cause significant decreases in productivity in both beef and dairy operations. Instituting a timely and effective deworming schedule will keep cattle healthier and increase profitability.

Safe-Guard is a highly effective dewormer that can be fed at the bunk or dosed orally. It works against several types of worms and, with a variety of forms available, it can easily be incorporated on to most cattle operations. At Famo Feeds, we manufacture Safe-Guard pellets which can conveniently be fed as a single day deworming treatment. 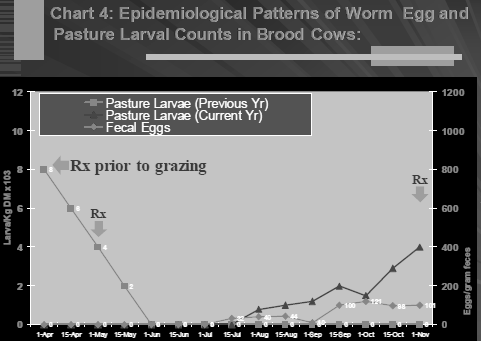 Why Bother with Strategic Deworming?
Chart 4 shows the importance of strategic deworming. Fall deworming alleviates any buildup of intestinal parasites that have accumulated over the grazing season as cattle are moved off pasture. Spring pasture deworming prevents worm infestation from larvae that have survived on pasture from the previous year. Spring pasture deworming also kills maturing worms before they lay eggs and reinfect the pasture helping reduce late season exposure.

The results are summarized below:

Using a Oklahoma City-based average price of $2.30/lb for 7 to 8 weight steers (quoted 9/2014), the extra 23 lbs gained by the South group translated into an extra $52.90/head or $12,801.80 for all 242 steers. Besides the increases in gain, the combination treatment of Safe-Guard and ivermectin along with the range cubes costs 20% less than the long acting eprinomectin. Each steer gained 23 lbs more and it cost 20% less!

Dairy cows managed on grazing programs may become parasitized. As much as 6 lbs of milk can be lost per cow per day when dairy cattle struggle with internal parasitism. For 100 head of cattle that’s 600 lbs of milk/day that is lost. Though deworming comes at a cost, that cost is significantly less than the production loss due to internal parasites.

*heifers treated with Safe-Guard. Refers to weeks relative to turnout on pasture.
**heifers weighed less than 400 lb at turnout so no initial treatment was given.